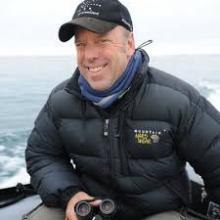 It was all for a picture. He dreamed of photographing the Arctic’s most iconic animal, the polar bear, in its natural habitat. It was a seemingly simple plan: Haul a 22-foot fishing boat northeast a few thousand miles, launch, and shoot the perfect polar bear photo. After an inauspicious start and endless days spent driving to the end of northern Canada’s road system, he backed his C-Dory, C-Sick, into a small tributary of Hudson Bay. Battered by winds and plagued by questionable navigation, Paul slowly motored C-Sick north in the hopes of finding the melting summer ice that should be home to more than a thousand polar bears. He struggled along for weeks, grounding on rocks, hiding from storms, and stopping in isolated Inuit villages, until finally, he found the ice and the world was transformed. The ice had brought hundreds of walrus into the bay and dozens of polar bears arrived to hunt and feed. For a few magical days, he was surrounded by incredible wildlife photo ops . He was hooked.

A hilarious and evocative misadventure, Arctic Solitaire shares Paul Souders' exploits across four summers, thousands of  miles of a vast inland sea, and the unpredictable Arctic wilderness—and also offers an insightful look at what compels a person to embark on adventure. The accompanying images of the landscape, people, and wildlife of the remote Hudson Bay region are, in a word, stunning.

Paul Souders is a professional photographer, travelling around the world and across all seven continents for more than thirty years. His images have appeared around the globe in a wide variety of publications, including National Geographic, Geo in France and Germany and Time and Life magazines, as well as hundreds of publishing and advertising projects. His recent photography work in the Arctic has drawn wide acclaim, including first-place awards at the BBC Wildlife Photographer of the Year competition in 2011 and 2013, the National Geographic Photo of the Year contest in 2013, and Grand Prize in the 2014 Big Picture Competition. Over the last three decades he has visited more than sixty-five countries and has been slapped by penguins, head-butted by walrus, terrorized by lions, and menaced by vertebrates large and small.

Arctic Solitaire: A Boat, a Bay, and the Quest for the Perfect Bear (Hardcover)