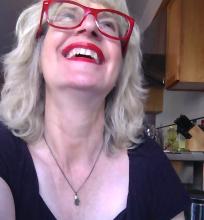 “The Puppet Turners of Narrow Interior is a masterpiece of mash-up, a fever dream of crime fiction, steam punk, and academic farce that reveals the great and powerful voice of Stephanie Hammer. This is a novel that takes huge chances and pays them off. Funny, weird, and absolutely original.” –Tod Goldberg, Gangsterland

The Puppet Turners of Narrow Interior is a fable-ous novel of secrets and heritage. Henry, the youngest son of a hotel magnate, is sent to calm the inhabitants as the hoteliers set about to despoil this odd byway. Instead, aided by his black sheep cousin and a cast of quirky characters, including Quirk, Henry sets out to discover the town secrets. The more he learns, the darker his mission appears, until Henry must choose if he is willing to risk all.

Descended from Norwegian plumbers and broke bohemian Russian aristocrats, Stephanie Barbe’ Hammer is the author of the poetry collections How Formal? and Sex With Buildings. Puppet Turners of Narrow Interior is her first novel. She has received 4 Pushcart nominations and her work has appeared in Hayden’s Ferry Review, Bellevue Literary Review, Mosaic, and elsewhere. A recovering New Yorker, Stephanie is a Professor Emerita of Comparative Literature at the University of California, and now teaches at writers' associations, conferences, and anywhere readers and writers want to learn about creativity, world literature, and why the imagination matters. She and her husband, interfaith blogger Larry Behrendt, divide their time between Los Angeles, CA and Coupeville, WA.