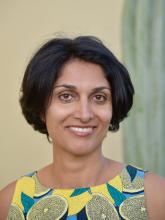 Daylight Forever is a true story of a high school student from war-torn, post revolutionary Iran who is now a successful business woman in the United States. It is a story of an immigrant to the United States who, as a young girl, experienced the Islamic Revolution of 1978, the persecution of the Baha'i after the revolution and repeated bombing attacks of Tehran, her hometown, during the 8-year-long Iran-Iraq war. The story chronicles a 15-year-old girl's dangerous journey across the Iran-Pakistan border without her parents and her petition for asylum from the United Nations. Her final destination is the United States where she ultimately reunites with her family and finds safety and opportunity in a country she has called home for three decades.

Dr. Mahvash Khajavi-Harvey is a dentist in private practice in Seattle and a part time affiliated faculty at the University of Washington School of Dentistry. A firm believer in the power of community--both far and wide--she has volunteered dentistry services overseas in third-world communities and also provides free dental care in Seattle at local homeless clinics every year. Dr. Harvey is an outspoken advocate of human rights issues and supports numerous nonprofits including: the Mona Foundation, the Tahirih Justice Center and the Northwest Immigrant Rights Project. For several years, she served on the board of Journey with an Afghan School, a non-profit NGO, which was founded post 9/11 to build schools for girls in Afghanistan.