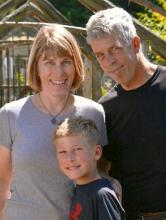 RESERVE YOUR SPOT NOW! Kick off Nanowrimo (National Novel-Writing Month) with a workshop by award-winning author and teacher Scott Driscoll.

Stories begin when something disturbs the protagonist’s familiar world. Delve into the inciting incident and its connection to character -- start strong!

Will our readers turn the page or put the book down? The answer has much to do with how much is at stake for our characters. Driscoll shows us how to develop the link between the inciting incident and our character’s deeply held core values.

Award-winning instructor Scott Driscoll holds an MFA from the U of WA and has been teaching creative writing for twenty years.

While finishing Better You Go Home—a novel that grew out of the exploration of the Czech side of his family after Eastern Europe became liberated—Driscoll kept busy freelancing stories to both commercial and literary magazines. His work has been cited in the Best American Essays. His short stories and narrative essays have been published extensively in literary journals and anthologies, including Image Magazine, Ex-Files, The Seattle Review, American Fiction '88 and others.

Better You Go Home was selected as the Foreword Reviews First Book Contest winner. Driscoll has been awarded eight Society of Professional Journalists awards, the Milliman Award for Fiction, and an Educational Outreach Award for Excellence in Teaching.

"Scott Driscoll's gripping, gritty novel, Better You Go Home, is a mystery, a race against time and a love story with a strong dose of political thriller thrown in.”

"Compelling, unnerving, full of insight... In this odyssey of an American trying to find his past and save his life, we're taken back behind the fallen Iron Curtain and the ghosts that still live and breathe there. Terse with poetry, broad in history (and heart), and all the suspense of an Eastern Block espionage, Driscoll delivers."

-Layne Maheu, author of Song of the Crow