Whether of Pan-American heritage or 4th generation from one rural WA town; whether poet, memoirist, writer of short fiction, or novelist; whether queer or queer-ally; whether writing haunting detective westerns or writing of women determined to be victors, not victims; whether 2nd generation American or descended from a notorious murderer; whether from families that picked our fruit or built the Columbia’s dams, what these six authors have in common is eastern Washington roots, heritage and identity.

Join us for a lively conversation as these diverse acclaimed literary voices—born and raised right next door—explore differences and common ground. Use this link to join the zoom: 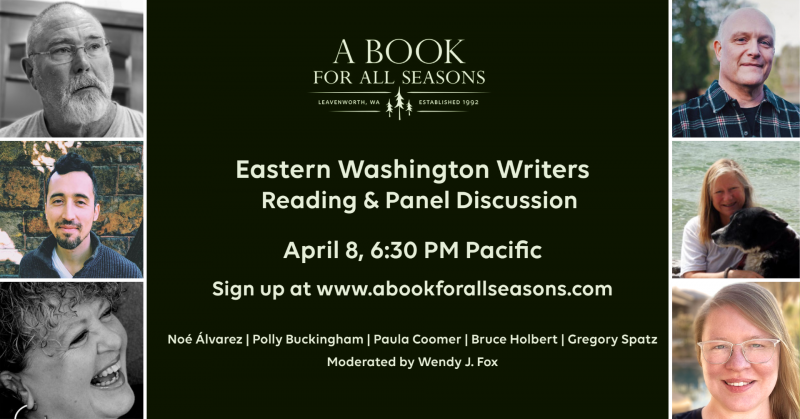 Noé Álvarez grew up in Yakima, the son of farmworkers who immigrated from Mexico. He holds degrees in philosophy and creative writing from Whitman College and Emerson College, and has studied peacemaking, and conflict resolution at American University, Princeton, and in Northern Ireland. In Spirit Run, Álvarez tells the story of how running the length of North America brought him closer to the land, his indigenous and immigrant ancestors, and his own identity.

“Álvarez has established himself as an important voice for second-generation Americans who too often are made to feel as if they are outsiders in their native country. His story represents a powerful reclaiming of his right to belong.” – Washington Post

Paula Coomer’s novels include Jagged Edge of the Sky and Dove Creek, short story collections Somebody Should Have Scolded the Girl and Summer of Government Cheese, poetry collections Nurses Who Love English and Devil at the Crossroads. Her food memoir, Blue Moon Vegetarian, was followed by the much-loved cookbook Blue Moon Vegan. Ms. Coomer has been a nominee for the Pulitzer, the Pushcart, and other awards. She lives in Garfield, Washington, where she coaches writers and organizes the Clearwater Writers retreat program.

Somebody Should Have Scolded the Girl is “an honest and unflinching look at the lives of strong, resilient, and deeply vulnerable rural women… [It is Coomer’s] ‘attempt to take my family history and create from it stories about women who own themselves, women who are victors, not victims.' … gorgeous… unforgettable." -- award-winning author Laura Pritchett.

Bruce Holbert grew up in the country described in his three novels—Whiskey, Lonesome Animals and Hour of Lead—a combination of rocky scabland farms and desert brush at the foot of the Okanogan Mountains. Holbert’s great-grandfather was an early settler of Grand Coulee; his grandmother ran a one-room schoolhouse and the family ranch; and his father helped build Grand Coulee dam and worked many construction jobs—Holbert had lived in 23 different towns by the age of six. A survivor of violence and generational violence, Bruce graduated from EWU and now teaches “school resistant” students at Mt. Spokane High School.

“With the gruff humor of Cormac McCarthy and a dash of the madcap irony of Charles Portis, and a strong, authentic literary voice all his own, Bruce Holbert traverses the harsh landscape of America’s northwestern border and finds a family unlike any you’ve met before.” -- Montana Public Radio

Polly Buckingham is the award-winning author of the poetry collection The River People and of two short story collections: The Expense of a View, winner of the Katherine Anne Porter Prize in Short Fiction, and A Year of Silence, winner of the Jeanne Leiby Memorial Chapbook Award. She is the founding editor of StringTown Press, editor of Willow Springs, and teaches at EWU.

Washington State Book Award-winner Gregory Spatz is the recipient of a Michener Fellowship, an Iowa Arts Fellowship, and an NEA Fellowship, and teaches at EWU. He is the author of the novels Inukshuk, Fiddler’s Dream and No One But Us; the short story collections Half as Happy and Wonderful Tricks; and the linked fiction collection What Could Be Saved. Spatz plays fiddle in the twice Juno-nominated bluegrass band John Reischman and the Jaybirds.

"Spatz curates his language with the care of a skilled instrument maker, shaping the lives of makers and performers and amateur players." -- NPR Books

Wendy J. Fox was born and raised in Tonasket, WA. Her first book, The Seven Stages of Anger & Other Stories was a finalist for the Colorado Book Award; her debut novel The Pull of It was named a top pick by Displaced Nation; and her most recent novel If The Ice Had Held is a Buzzfeed recommended read and a grand prize winner from Santa Fe Writers Project. She is a frequent workshop leader and event panelist.

Somebody Should Have Scolded The Girl (Paperback)

The Hour of Lead: A Novel (Paperback)

Half as Happy (Paperback)

If the Ice Had Held (SFWP Literary Awards) (Paperback)

The Pull of It (Paperback)